Suzuki has announced details of its latest generation Hayabusa, with the new – and hotly-anticipated – third iteration of the legendary hyperbike coming with over 550 new parts, including: 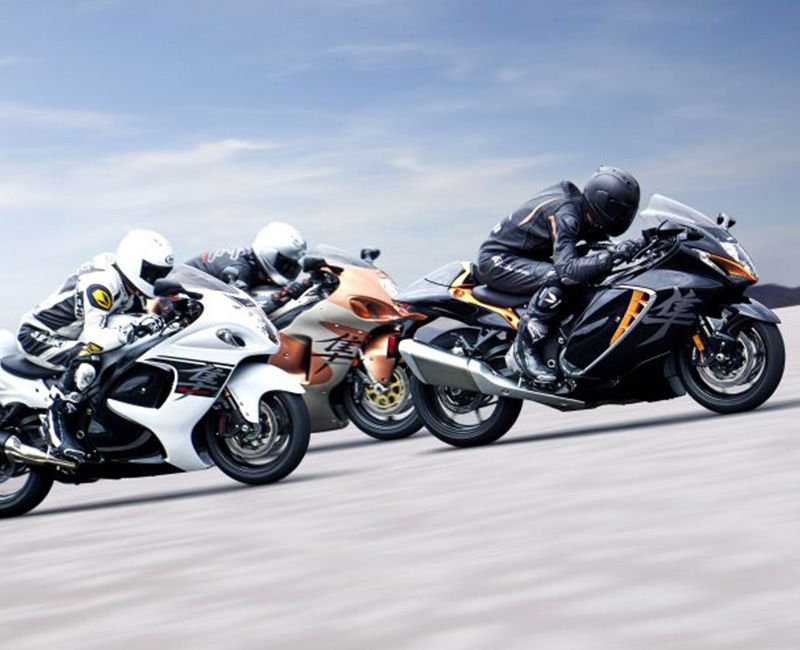 Launched in 1999, the Hayabusa stunned the motorcycling world and gave birth to the hypersport category. Taking its name from the Japanese for Peregrine falcon – famed for feasting on blackbirds – it delivered unrivalled performance, was immediately recognisable thanks to its now-iconic silhouette, and went on to develop cult status. Its monster engine enabled a smooth, turbine-like power delivery and an eye-widening top-end rush, but also gave it a flexibility and usability rivals could only dream of, while wind tunnel-designed bodywork allowed it to slip through the air effortlessly.

The launch of the second generation Hayabusa in 2008 boosted capacity and power, while a mid-term update in 2013 added Brembo monobloc calipers and ABS, updates that brought the machine firmly into the 21st century, yet remained faithful to the unique styling that has earned the Hayabusa its icon status.

Nearly 200,000 units later a third generation takes all that was right with the genre-defining hyperbike, but leverages the latest technologies to provide greater control and improved comfort to maintain its position as the ultimate sports bike. 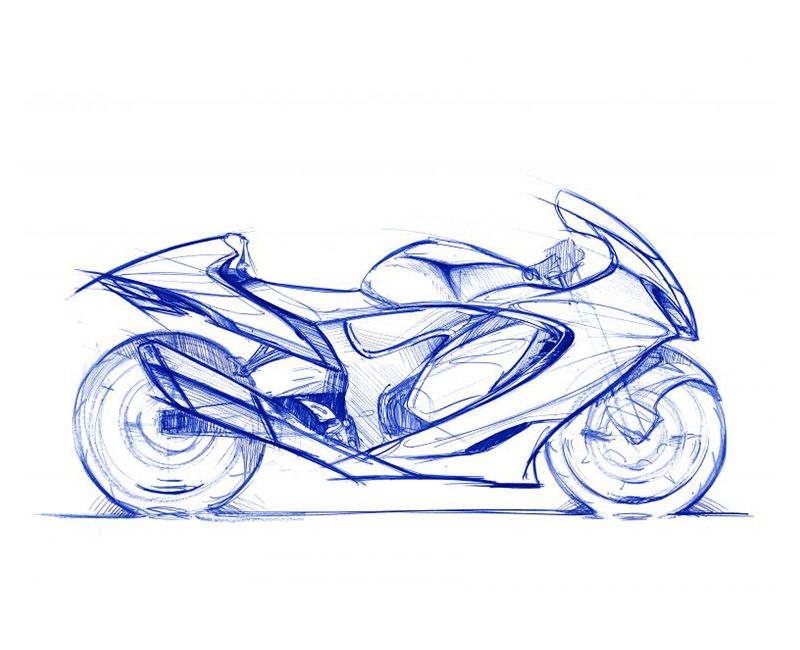 After the launch of the original in 1999, the Hayabusa’s striking aerodynamic silhouette has become instantly recognisable; nothing looks quite like a Hayabusa.

During the design of the third generation machine the concept of ‘the refined beast’ made sure that Suzuki designers did not bring about wholesale changes, but instead made sure the latest iteration was still immediately identifiable as a Hayabusa. And 21 years on, still nothing looks quite like a Hayabusa.

Still low, long, and wide, the new generation has faithfully inherited the DNA of its predecessors, but with sharper lines and a tough, modern look that oozes refinement, class, and ultimate performance. It has been brought firmly into the present and future-proofed for the road ahead.

The overall result is a look of higher quality and greater luxury fused with the daunting image of the fierce bird of prey from which it takes its name.

The side profile looks every inch Hayabusa, but the design features straighter, sharper lines, from the new mirror design to the famous seat hump. A fresh face comes from new vertically stacked LED headlights, nestled between the new angular air intakes. New position lights flanking the scoops double up as integrated turn signals.

Great effort was also devoted to designing the straight-edged exhaust and mufflers, that sweep up towards the tail (which itself features new LED rear combination lights) to create a mass-forward look.

Much like the design of the Hayabusa’s bodywork, the iconic machine’s clocks are just as much a part of the bike’s identity. And much like the bodywork, they too have been redesigned to embrace modern technology – in the form of a colour TFT screen – while retaining the elements that standout as Hayabusa: the two large dials that flank the new TFT display.

The large analog tachometer and speedometer gain a fresh, more attractive appearance. Features include bigger, bolder numbering that improves legibility, and raised scale markings around the periphery of each meter use LED lighting to provide a clearer view and faster recognition. 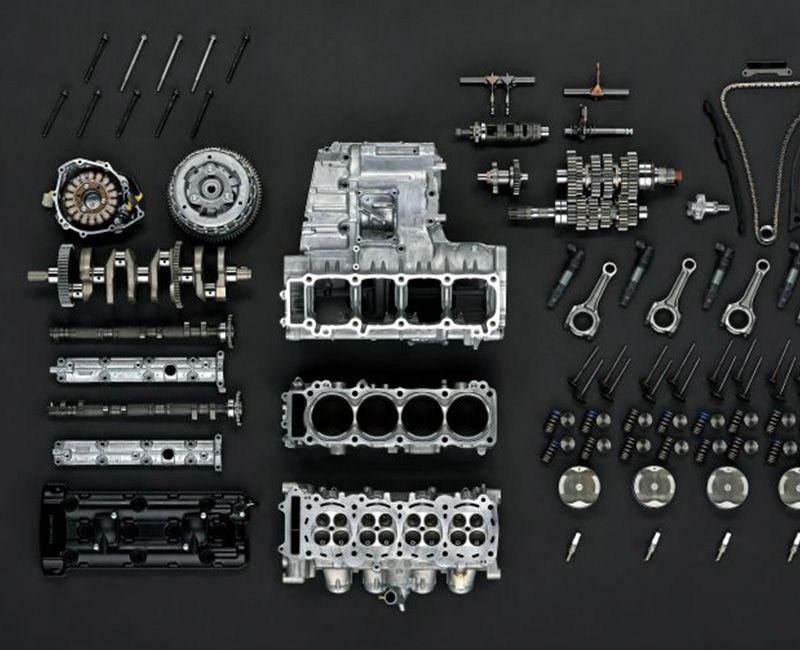 During the development of the new Hayabusa many prototypes were evaluated, with many featuring different engine configurations. Engine designer Naoki Mizoguchi explained, “We considered a variety of engine configurations before arriving at the final design. Experimentation included building prototypes with larger displacement engines, turbocharged versions, and others with six cylinders. In the end we came to the conclusion that the original engine package achieved the best overall balance. We also came to the conclusion that not changing the basic layout was key to retaining the Hayabusa’s distinct identity. So we applied the best of its proven qualities when we sat down to set the latest engine design. Our goal was to create a better engine while building on the same proven layout.”

As a result of Mizoguchi and the engineer’s work, the 1340cc, inline-four cylinder engine has undergone extensive reworking, with the aim of boosting performance and improving power and torque in the low and mid-range RPM. The result – especially when allied to new performance-enhancing electronics – is the fastest-launching Hayabusa yet as well as a more rideable and flexible engine for everyday use, plus added durability and reliability, also.

While the new Hayabusa remains electronically limited to 299km/h (186mph), it outpaces its predecessors off the mark thanks to a flatter torque curve that fills in a flat spot identified in earlier iterations in the lower rev ranges.

A new ride-by-wire electronic throttle system works with the new Hayabusa’s variety of electronic control systems, while also providing a light, natural response with linear control, similar to that of conventional throttle operation. In conjunction with the introduction of this new throttle system, the size of the tapered throttle bodies has changed from 44mm to 43mm, but the overall intake pipe length, (including the intake pipe, throttle body, and funnel), is extended by 12mm over the previous intake system. This contributes to producing greater power output at low and mid-range engine speeds.

There’s also a new side feed fuel injector that places the secondary injector at an angle on the side of the intake funnel. Its spray strikes a reflecting plate in the funnel and creates a fine mist that enters the combustion chamber. The result is again an increase in power and torque output at lower engine speeds.

New air intakes reduce pressure loss and increase flow into a larger airbox, which ups capacity from 10.3 to 11.5 litres, and while retaining the bold, twin muffler design the Hayabusa is known for, a new exhaust system saves over 2kg over the previous system, as a new pipe connecting cylinders one and four helps delivery more bottom end torque. A new two-stage catalytic converter replaces the previous single-stage design to help meet Euro5 emissions standards. 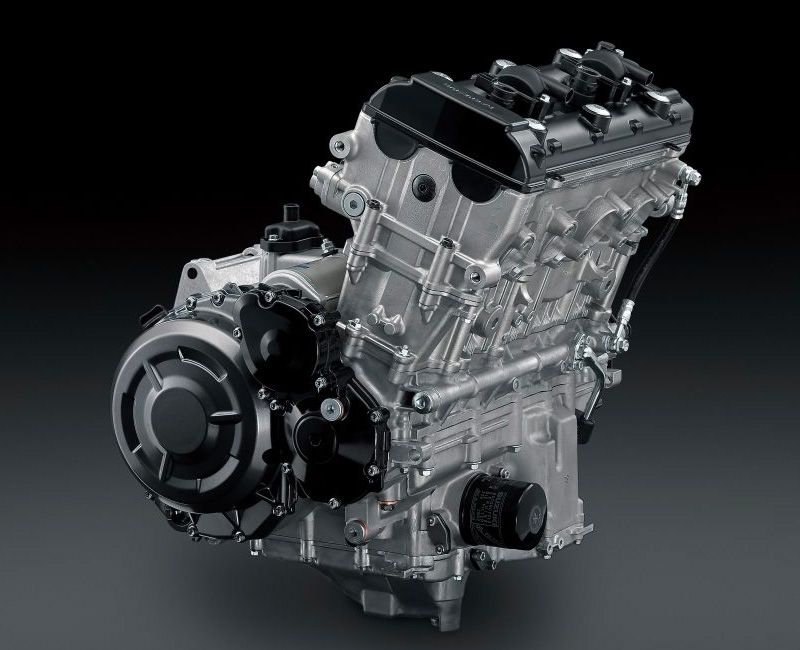 A major leap forward from the second to the third generation Hayabusa comes from a new, comprehensive suite of electronics aimed at improving everything from performance to rider comfort, and safety.

Encompassed within the latest version of Suzuki Intelligent Ride System (SIRS) is the below:

There are also 10 modes of Motion Track Traction Control from an IMU-controlled system that uses the same technology as Suzuki’s world championship-winning MotoGP machine and GSX-R1000R. The lean angle-sensitive system takes readings from the IMU, front and rear wheel speed sensors, crank position sensor, throttle position sensor, and gear position sensor to detect a loss of traction before the ECU controls output to the throttle valve, ignition coil, spark plugs, and fuel injectors to limit power. The system can also be turned off.

A further 10 modes of Anti-lift Control help prevent the front wheel from lifting during hard acceleration. The higher the setting the greater amount of control supplied. It, too, can be disabled.

A race-derived bi-directional quickshifter allows riders to shift up with the throttle wide open and without operating the clutch, while the need to blip the throttle on downshifts is also eradicated. Two modes mean riders can choose from a more race and performance orientated response, or a mode that responds to a lighter touch.

As part of SDMS-α come three factory preset rider modes – Active, Basic, and Comfort – with each using a combination of allotted settings for the above systems. Active uses the full power engine map, with traction control and anti-lift set to one out of 10 and the quickshifter on its raciest setting. Basic uses the same quickshifter setting but the softer throttle response with traction control and anti-lift set in the middle, at mode five of 10. Comfort sees those upped to 10, with the engine mapping set to its softest setting with reduced peak power, and the softer quickshifter setting. All three modes use the default engine brake control system setting.

However, three user-defined settings allow riders to tailor the settings to their own preferences and needs based on their experience or the riding conditions.

The new Hayabusa’s electronics suite is further bolstered by a launch control system with three modes that allow riders to limit engine RPM to 4,000, 6,000, or 8,000 RPM before launching, depending on their confidence or experience.

Cruise control allows riders to set their desired speed on longer journeys. With the system activated via a button on the right hand switchgear and the speed set and adjusted using buttons on the left, riders can release the twist grip and continue onwards at their preferred speed. The result is reduced fatigue and increased comfort. The system can be overridden with a touch of the brakes or by reopening the throttle. Owners can also set their preferred speed via a new speed limiter function, ensuring the motorcycle will not exceed that speed during operation. However, it too can be overridden by a quick twist of the throttle to allow riders to make overtakes or escape danger.

An intelligent braking system sees the third generation Hayabusa equipped with lean angle-sensitive ABS, helping riders track the intended line even when the brakes are applied mid-corner, plus linked brakes mean pressure is automatically applied to the rear brake when the front brake lever is operated, improving stopping performance.

The system also identifies when the brakes are being applied on a descent, with the ABS unit using input from the IMU to monitor the bike’s posture, before optimising front brake pressure to prevent rear wheel lift. The IMU also enables the new Hayabusa’s hill hold function, which automatically engages the rear brake for 30 seconds once the motorcycle comes to a stop facing uphill, even if the rider releases the brake lever or pedal. This helps ensure a smoother restart free of worries that the bike will roll backward.

Suzuki’s easy start system and low RPM assist functions also feature, meaning the engine fires with one brush of the starter button and the engine speed is automatically raised as the clutch lever is released to aid slow speed control and prevent stalling. A new emergency stop signal flashes the turn indicator lights when the brakes are suddenly and sharply applied to warn traffic in the immediate vicinity. 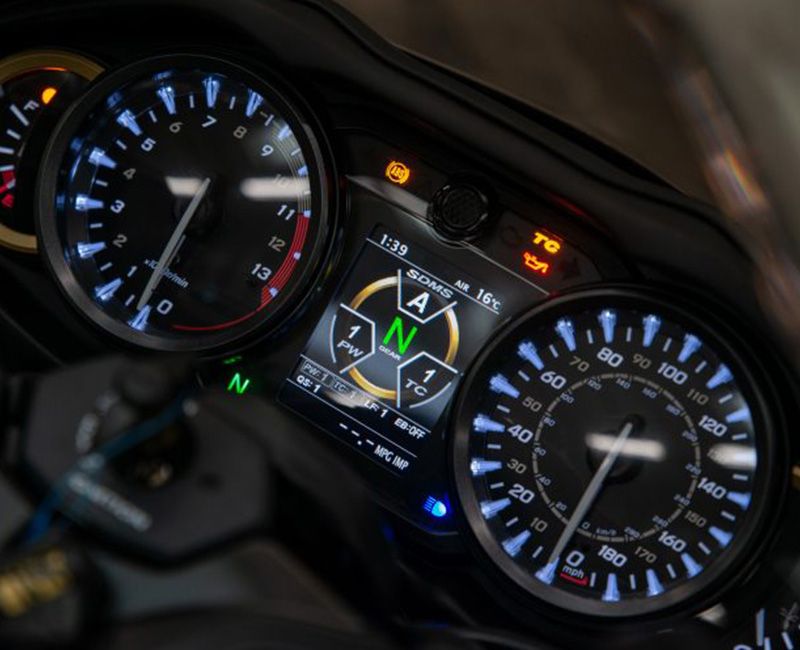 Hayabusa has always been known for its remarkable combination of high-speed stability and its planted feel alongside surprising agility and nimbleness. As a result, Suzuki engineers focussed on evolving the existing chassis setup to build on the proven base, as opposed to ringing the changes unnecessarily.

A new setup of the fully adjustable front and rear suspension units help improve the bike’s stability at speed as well as its ability to turn, and also deliver improved grip from the specially-designed Bridgestone Battlax Hypersport S22 tyres.

Longer journeys on the new Hayabusa are not only made easier thanks to the extensive electronics package, but changes to the bike’s ergonomics see the ‘bars brought closer to the rider by 12mm, aiding rider comfort while ensuring the rider remains directly connected to the front wheel. 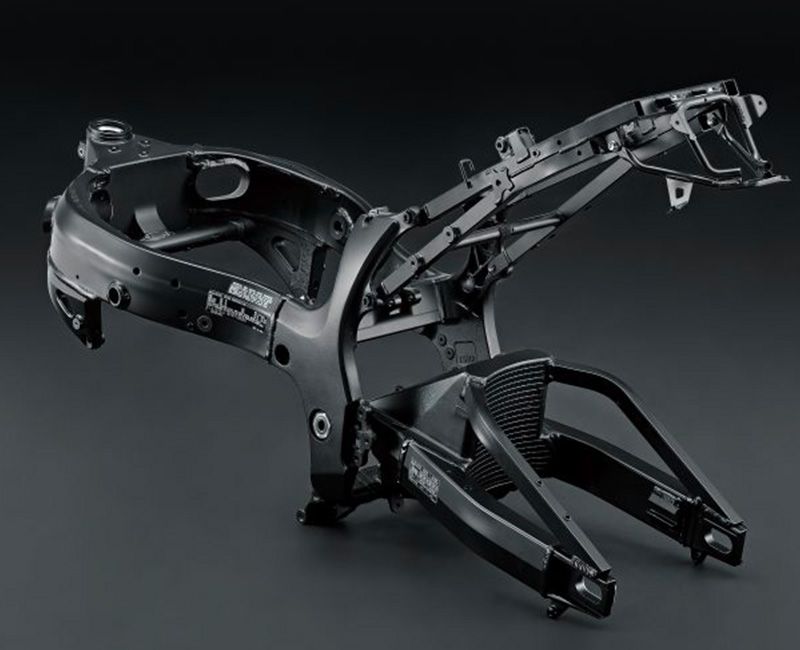